Today's Hidden Beauty is Shiobara Onsen Village, a collection a hot springs (or onsen in Japanese) in the mountains of Tochigi Prefecture in Nasu-Shiobara City. My mission today was to discover all seven of the different hot spring waters to be found in this amazing area, and in between I also got the chance to discover more of the town and try some local specialties. It was a busy day!

When I arrived the night before, I had a delicious dinner with Mr. Saito and Ms. Toyoda, who work in the local City Hall, and Alice Paquier, who is a Coordinator for International Relations for Nasu-Shiobara City. They gave me a great welcome! 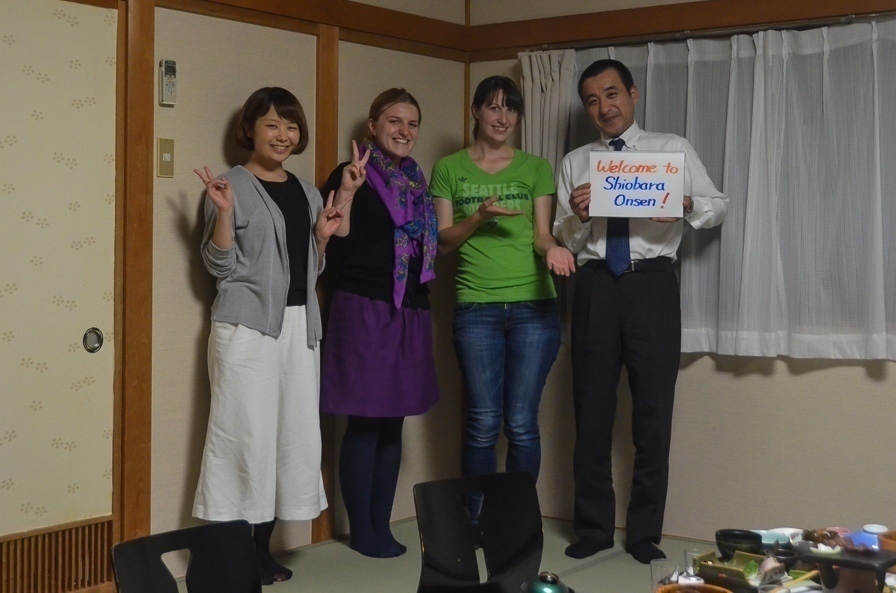 We're all excited for tomorrow!

As the day of seven colors began, I checked off my first color of water in the early morning. I was staying at the Ryokan Kounso, which has "toumei," or clear, water. 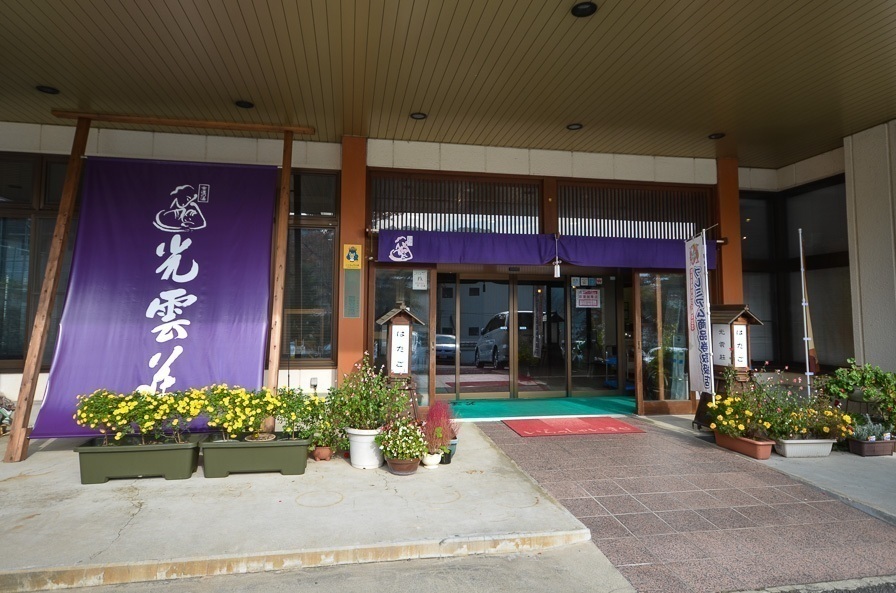 Not only are the baths here really nice both indoors and out, there is also a foot bath to try. You can even drink the water! Well... before it becomes foot-bathing water, anyway! 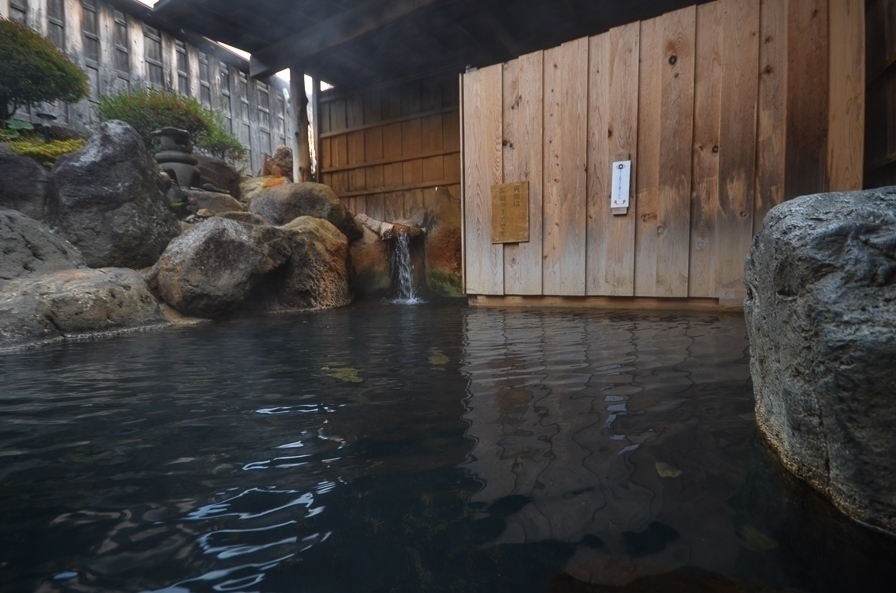 The outdoor bath at Kounso 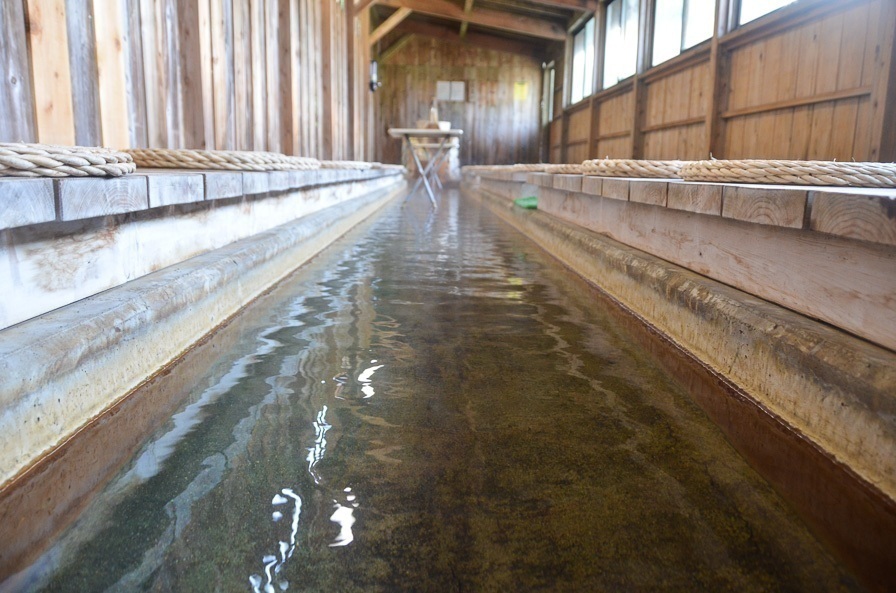 Clear-colored water in the footbath 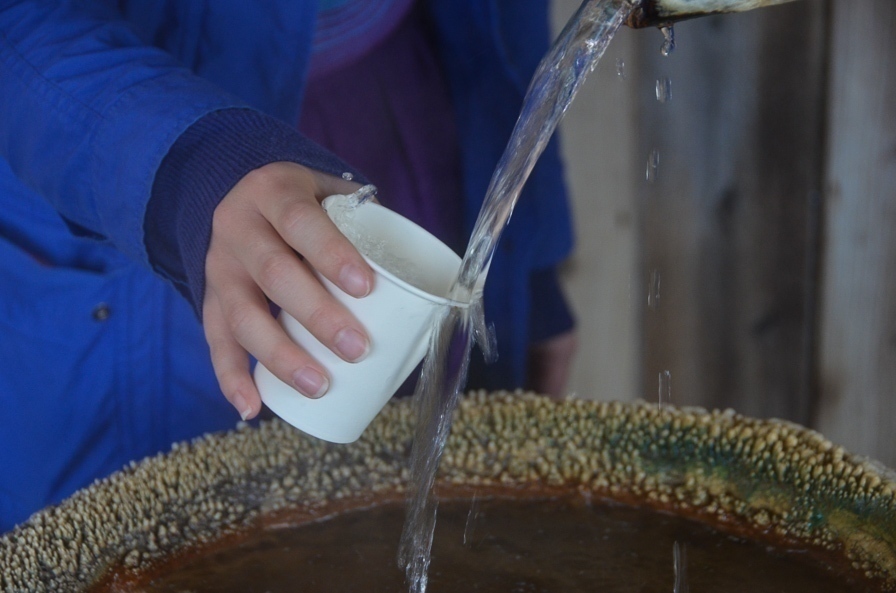 Mr. Sato, Ms. Toyoda, and Alice met me at my hotel at 9AM and we headed to the first onsen on the list. This particular place, Myogaya, is the only place in town with TWO colors of water! 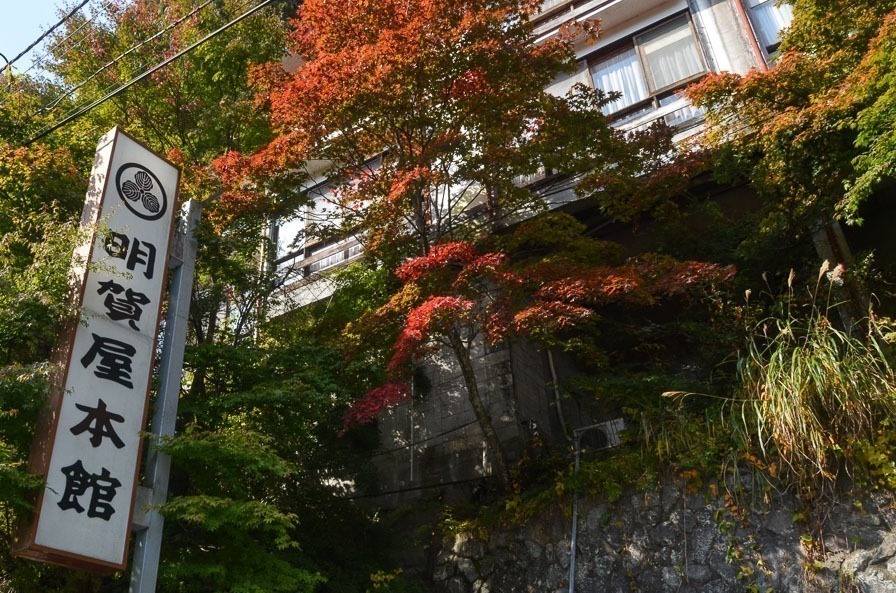 The maples at Myogaya are beautiful!

Some onsen, such as Kounso where I'm staying, allow people to use their baths during the day for a small fee. Myogaya, however, reserves its baths for guests only. They were kind enough to let us take a quick look and a few pictures, as no one was using the baths at the time. 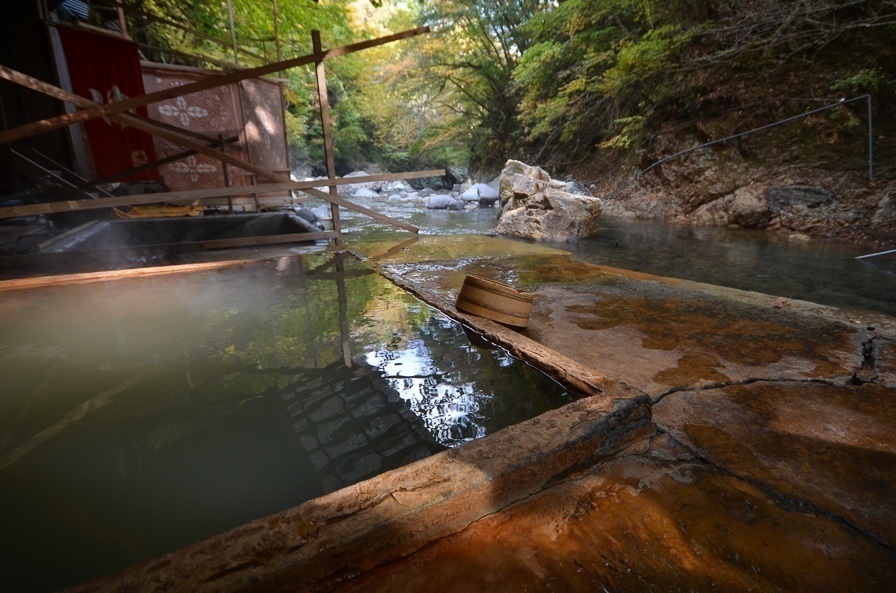 The outdoor baths, which sustained some damage in a flood this year, are "Chakasshoku", or tea-colored 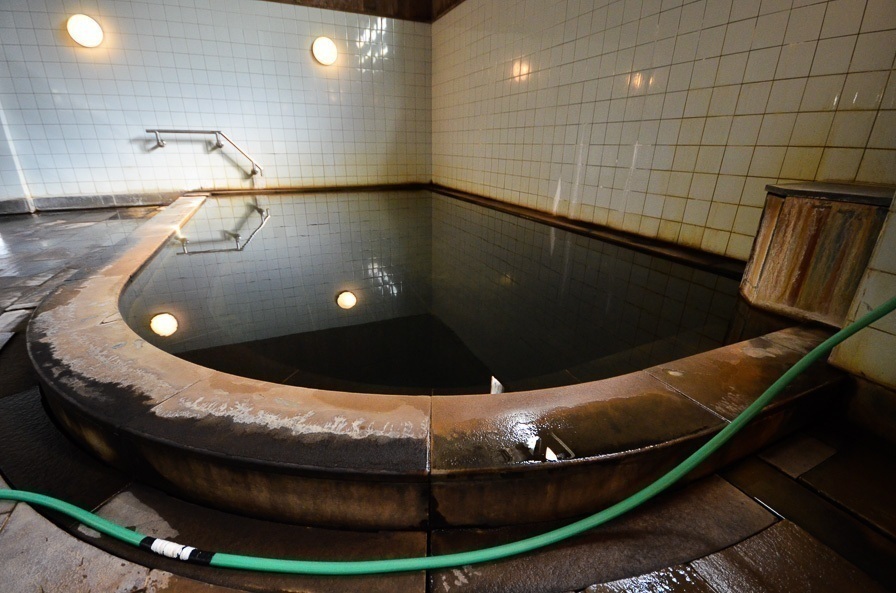 The indoor bath is "Usuzumi-iro"... ink-colored basically. I learned at this point how hard it is to take pictures of baths...

Also in the area is a true hidden gem... a tea house along the river down a bumpy dirt road. It was a quick break, but the perfect snack! 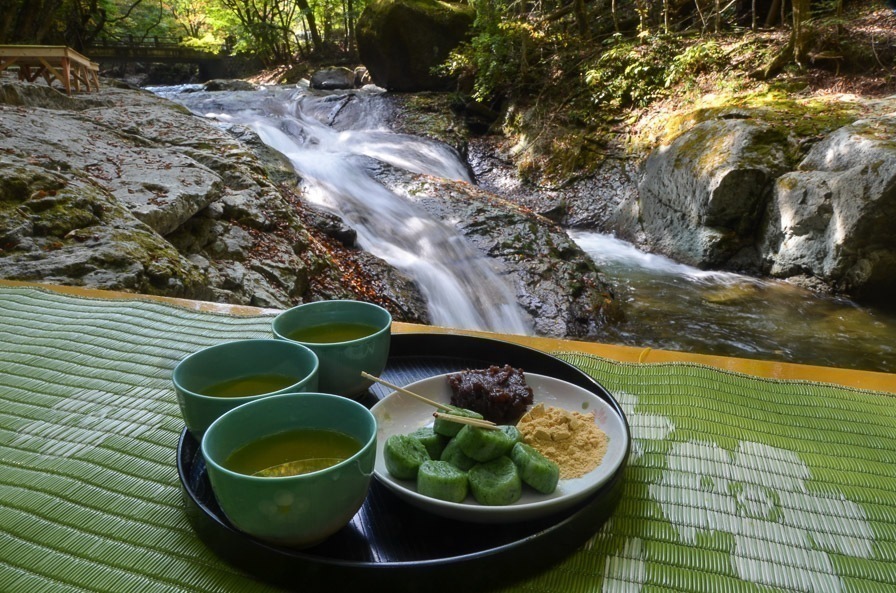 I think I could happily stay all day...

Our plan was another bath, but a quick call confirmed they were currently cleaning it. So instead, we headed to one of the city's suspension bridges, Nanatsuiwa, for some nice views. 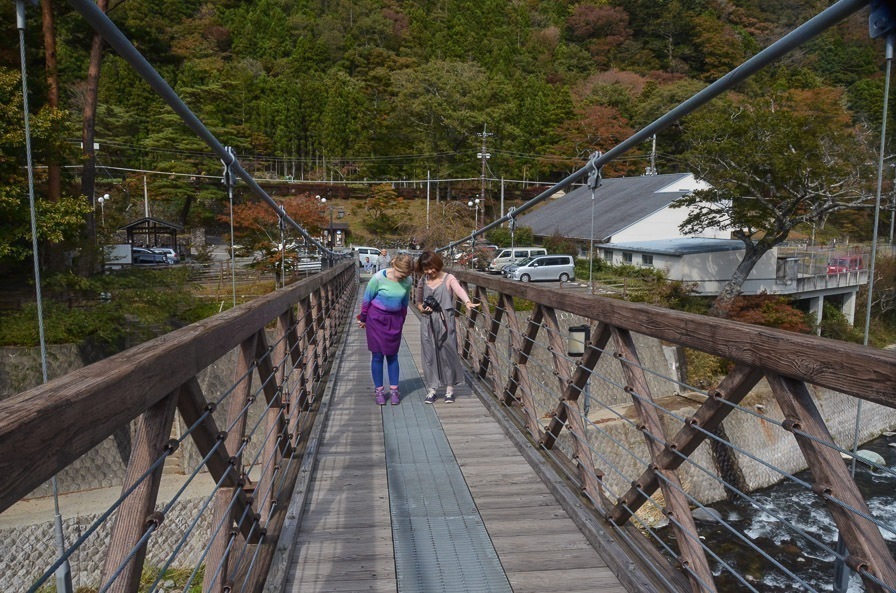 A grate allows you views of the water below... as long as you aren't afraid of heights! 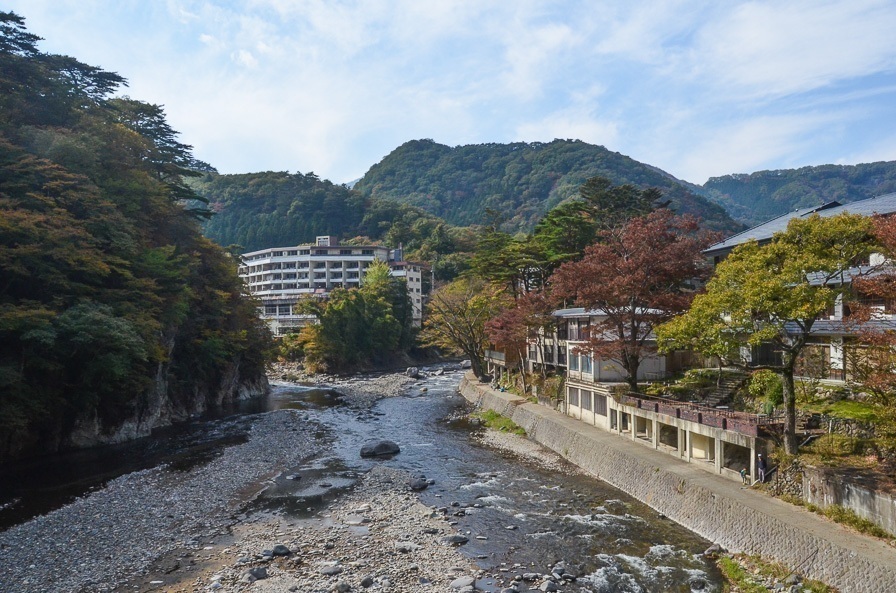 We also walked a pretty trail about 15 minutes to get views of two waterfalls... 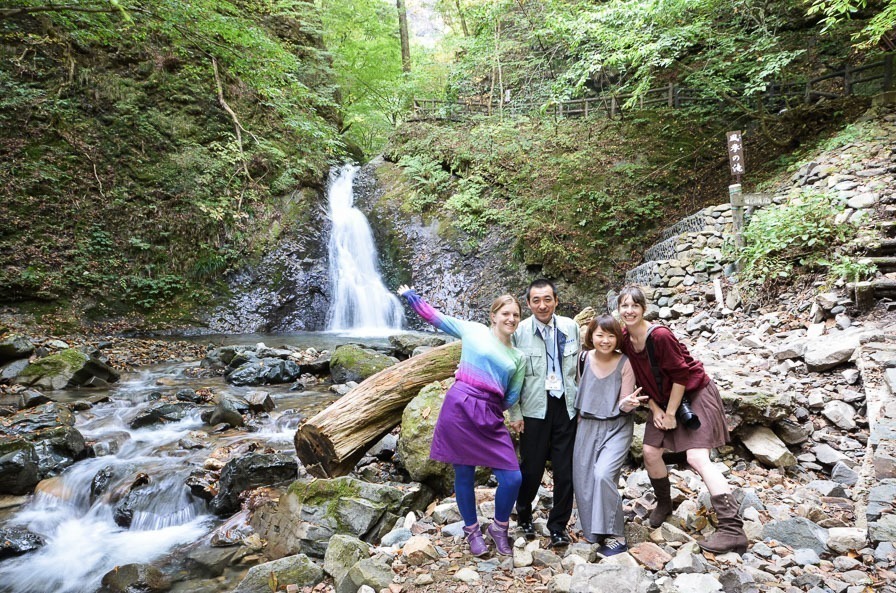 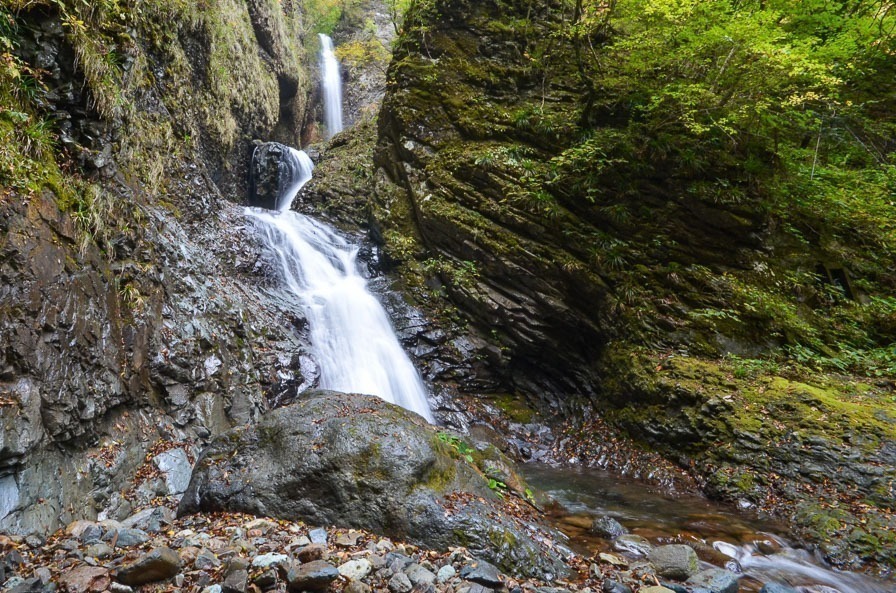 This one looks like a dragon climbing the mountain? Maybe?

Visited a local museum called the "Monogatari-kan" which features famous poets and writers who visited Shiobara... 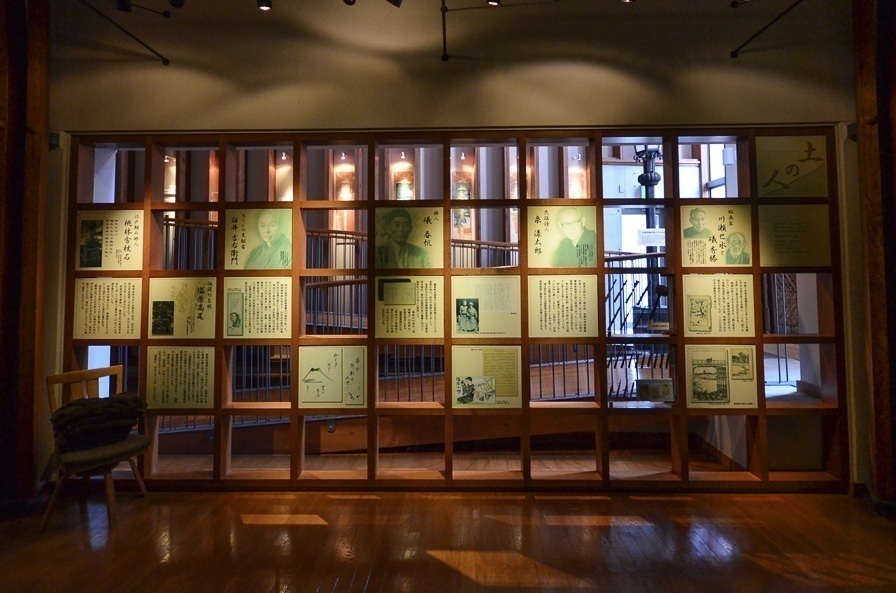 ...and saw another suspension bridge all before lunch! Lunch was the local specialty of "soup yakisoba". It was not what I expected, but it was unexpectedly delicious! 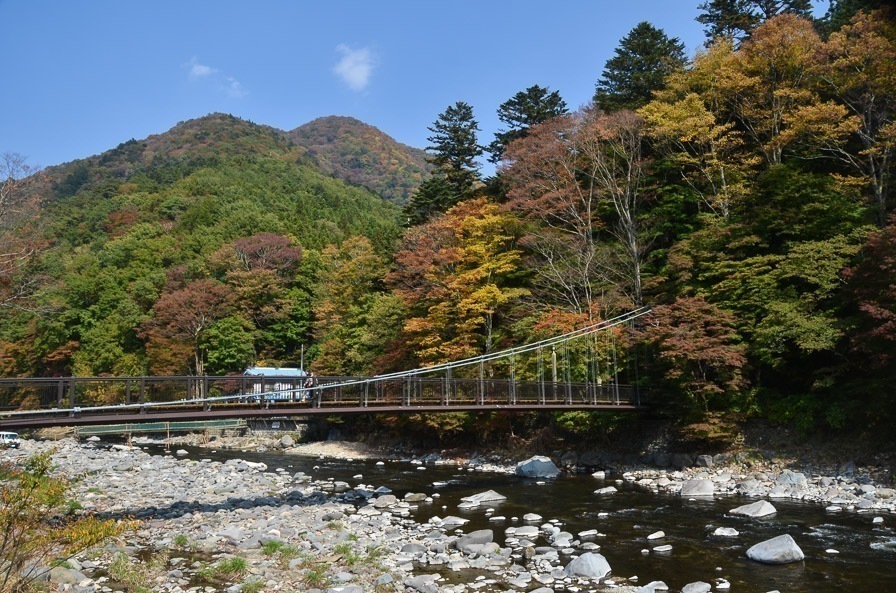 Stuffed with soup yakisoba, we continued our onsen quest. Our next destination was in Oku-Shiobara, a bit further up in the mountains from the main town. We were met at Gensenkan by Mr. Kimishima, who gave us a grand welcome! 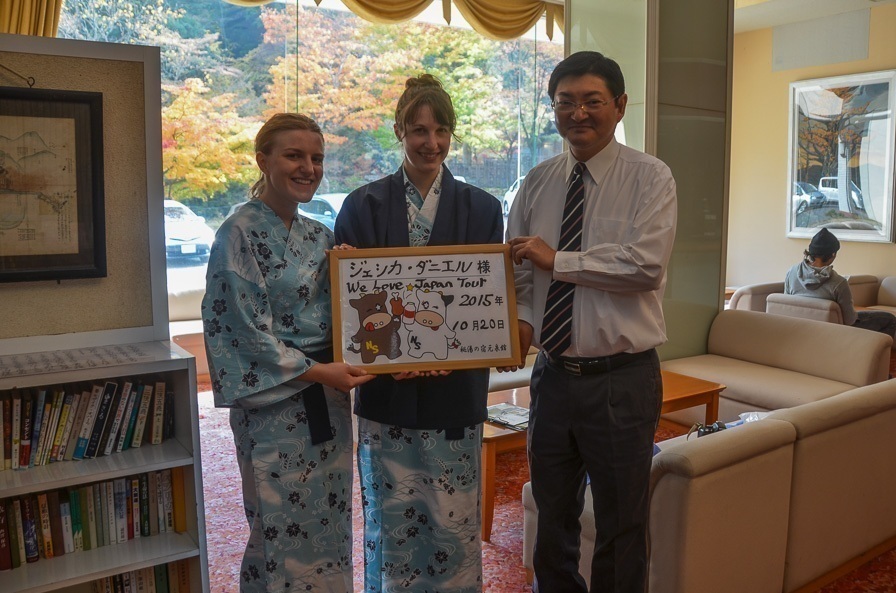 Wow! How cute are these cows!

Gensenkan has "ryokuhakushoku", or "greenish-white" water. Their baths also face the river, and are really relaxing! 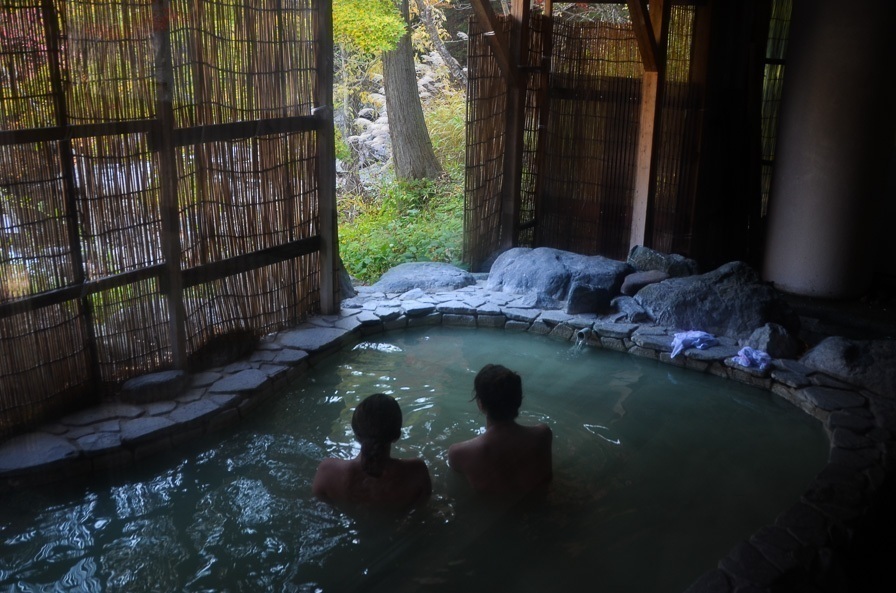 Before we left, Gensenkan presented me with an embroidered coat of the ryokan! I was so happy! 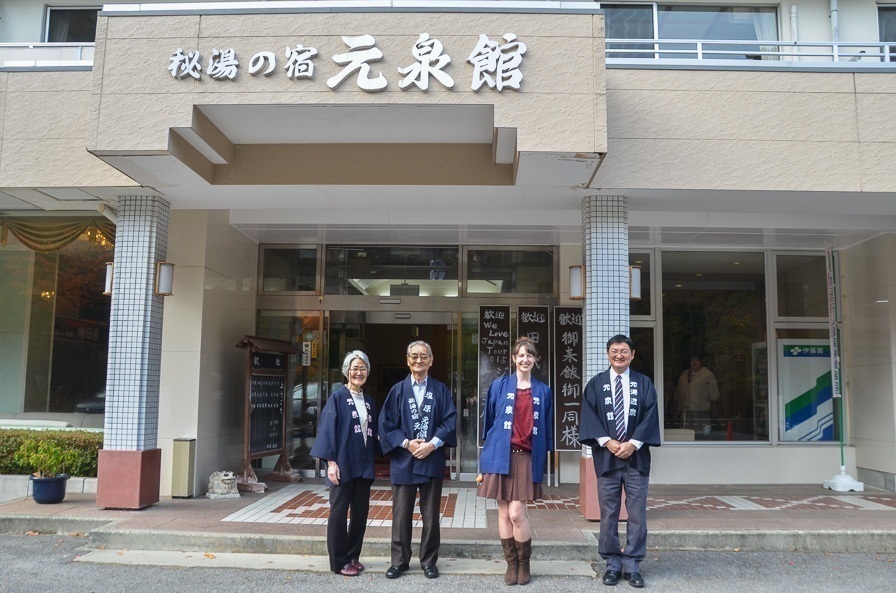 Does this make me staff? I'll try my best!

We waved goodbye to Gensenkan and headed just a few minutes away to Oidekan, which is the only source of "kokushoku", or black water, in the entire onsen area. It is truly rare! 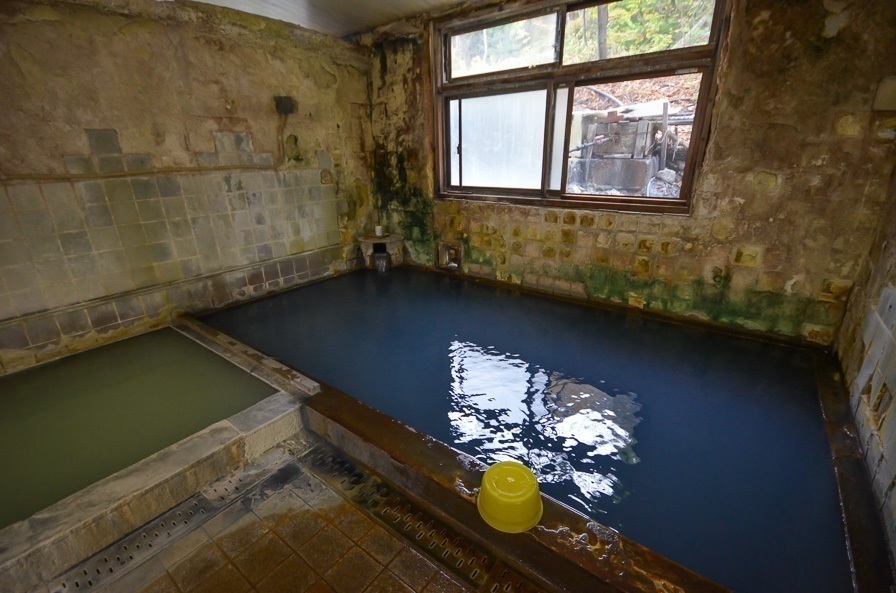 The left bath is the same milky green as Gensenkan. The right bath looks blue, but was black in person!

We even got a chance to see the source of both waters around the back of the ryokan. 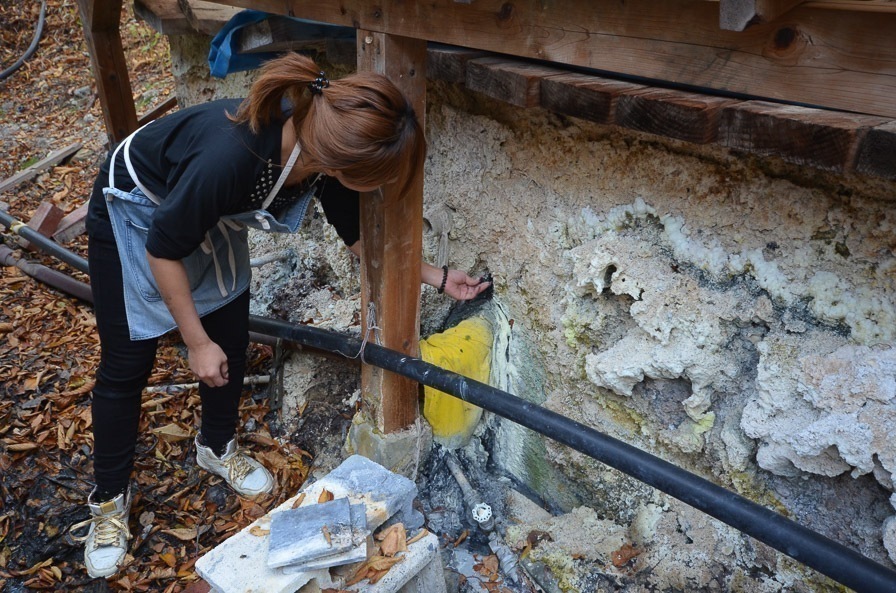 Her fingers came away black...

Two more to go! Our second-to-last was the "Nyuhakushoku", or milky water, of local favorite Mujinanoyu. 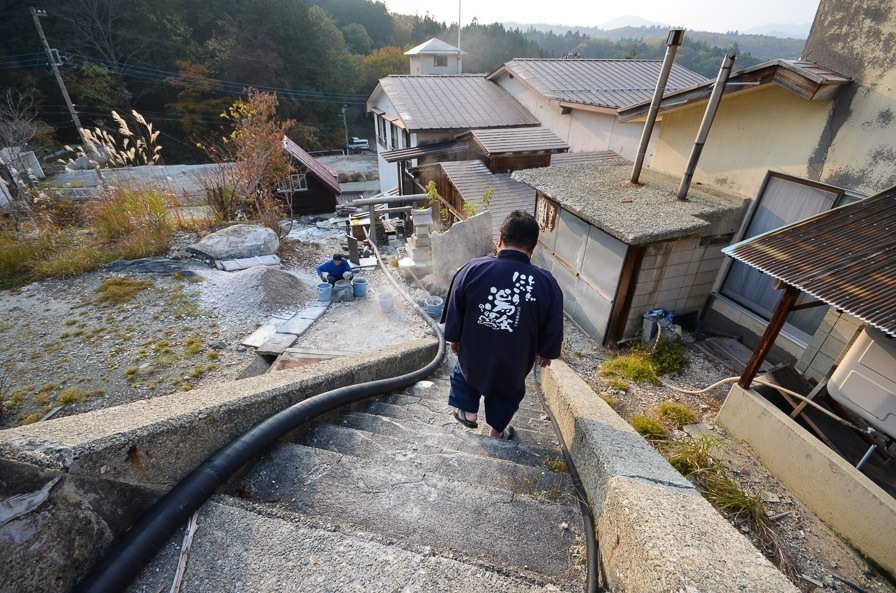 The president of the onsen, Mr. Sugiyama, showed us the source here as well. 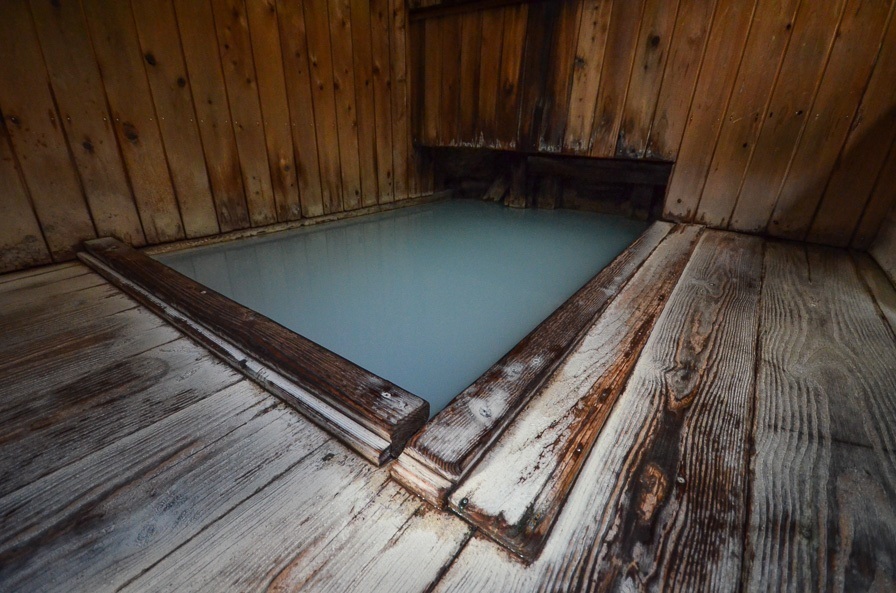 The milky color has stained the wood white

We took a quick break for another local specialty, "Toteyaki", which is a pancake rolled around filling. Ours was sweet, with red bean paste, green tea jelly, and whipped cream. Delicious!

Refreshed once again, we headed to the last bath, "Koganeiro", or gold-colored. Only two hotels in town have this water, one of which is the Hotel Shiobara Garden. It seems though that this color is affected by the light, and since it was late in the day, it didn't look gold at all. 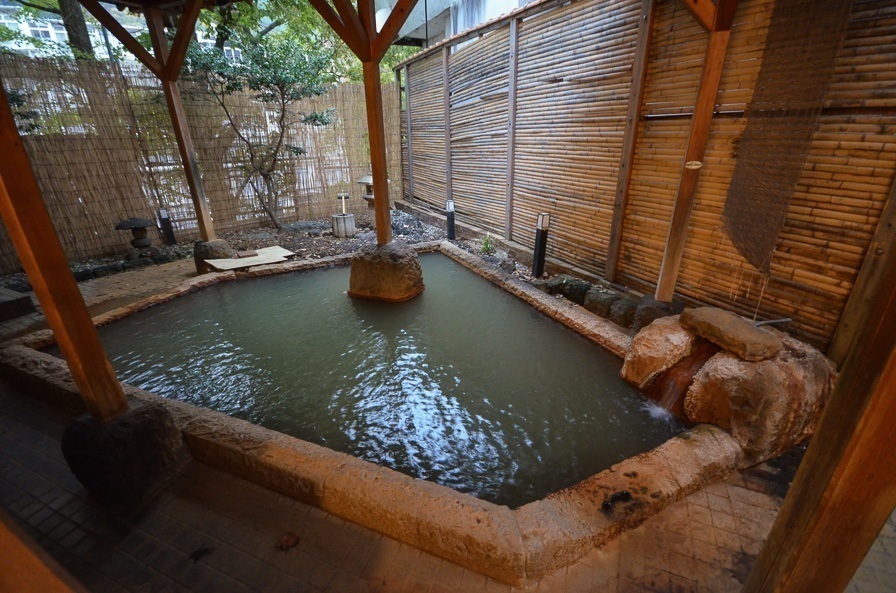 But I'm sure you can imagine it!

Victory! Seven colors of hot springs in one day! My wonderful guides dropped me off at my hotel, and we said our thank yous and goodbyes, and I promised to visit again in the future!

Then I headed to the baths, one more time. 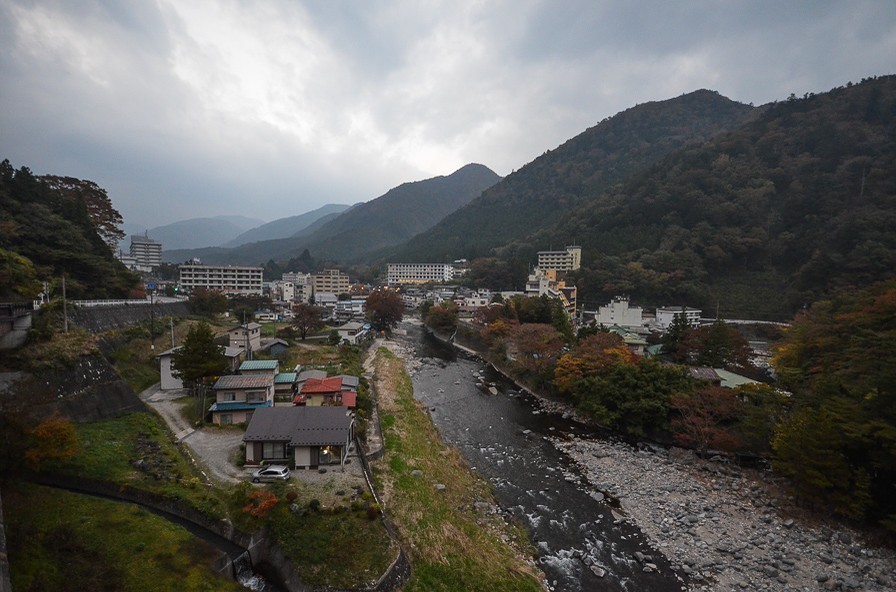 Previous
Ryujin Onsen, the mountain retreat of the daimyo
Next
Smoked bonito and other delicacies in Ise Shima
Planning to stay in Shiobara?
Find hotels in Shiobara Find hotels in Japan
powered by