Home
Back
In April 2001, we sent questionnaires to about 5000 people who were registered in the category of Japan of our pen pal service, and who indicated that they are willing to participate in surveys. We received 756 valid responses from Japanese people who live in Japan. Almost three quarters of the respondents were below the age of thirty, and 39 percent were students i.e. this survey is in no way representative for the whole Japanese population. However, it shows the trends among the younger Japanese generations. 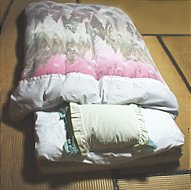 In our next questions we wanted to find out at what time the lights are being switched off in the average Japanese home on weekdays. The results of our survey suggests that this happens around 38 minutes after midnight. Men (12.43 am) indicated to go to bed about 10 minutes later than women (12.33 am); and male students stay awake the longest, and in average indicated not to go to bed until 1:01 am.

Our next question asked the survey participants when they usually get up on weekdays. The answers, which could also be calculated by looking at the results of the proceeding two questions, show that the average alarm clock rings at 7.07 am. According to our survey results, the first to get up are female company workers (6.47 am), and the last to get up are male students (7.28 am).

Finally, we wanted to find out until what time the average young Japanese sleeps on weekends. The answer suggested by our survey results is 9.05 am. Also, as many as 10 percent indicated not to get up until noon. The results show a quite large difference between the genders, with men (8.50 am) indicating to get up half an hour earlier than women (9.19 am) in average. Again, male students indicated to stay in bed the longest, and not to get up until 9.53 am in average. Students in general (9.38 am) indicated to sleep longer on weekends than company workers (9:08 am).