Home
Back
In April 2001, we sent questionnaires to about 5000 people who were registered in the category of Japan of our pen pal service, and who indicated that they are willing to participate in surveys. We received 835 valid responses from Japanese people who live in Japan. As always, over two thirds of the respondents were below the age of thirty, i.e. this survey is in no way representative for the whole Japanese population. However, it shows the trends among the younger Japanese generations. 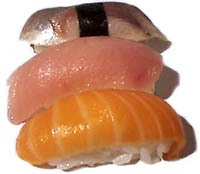 Sushi is not only the most famous Japanese food, but also one of the most popular among Japanese and non Japanese. Sushi comes in many forms: the classical nigiri zushi (small rice balls with fish and other small pieces of food on top), gunkan zushi (seafood in small cups made of sushi rice and seaweed), norimaki (sushi rolls), temaki zushi (sushi rice, seafood and other food in cones made of seaweed), chirashi zushi (seafood spread over sushi rice), inari zushi (sushi rice in small bags of deep fried tofu) and many more. But one ingredient is always present: sushi rice, cooked Japanese rice flavoured with sushi vinegar. For more information on sushi, please visit our sushi page. 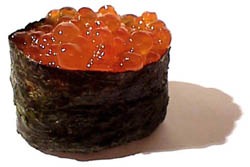 In Japan, sushi is usually still considered a special meal for special occasions, and is, therefore, eaten relatively rarely. Only about one quarter of the survey respondents eat sushi more than once per month, another quarter enjoys it just about once a month, and 35 percent once in two to four months. The remaining 13 percent eat sushi even less frequently, however, only three percent responded to never eat sushi at all. 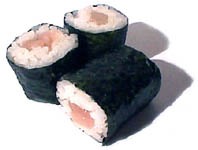 Next, we wanted to find out which sushi types are most frequently eaten. Survey participants were asked to select out of a list of 24 sushi types, the ones that they eat frequently. First of all, it must be said that in Japan nigiri zushi are most common and probably most readily associated with the term "sushi". This stands in contrast to some other countries where sushi rolls are often more common than nigiri zushi. In our hit list of sushi types, nigiri and gunkan zushi occupy all top spots. 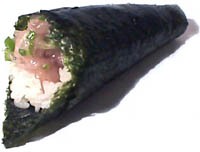 In our next questions, we asked survey participants to select their most and least favourite sushi types. According to our survey results, the most popular sushi type is Toro (nigiri), the fatty, more expensive part of tuna. 45 percent of survey participants answered that Toro is one of their favourite sushi. At the same time, only 9 percent indicated that they dislike Toro. On the second place of our sushi hit list follows Uni (sea urchin) with 32 percent. The creamy, brown sea urchin with the strong flavour that is usually served as a gunkan sushi is one of a few sushi types which is at the same time loved by many and disliked by almost as many. For Uni is also placed second in our list of most disliked sushi type with 28 percent. Ranked third in our list of most favourite sushi types is Amaebi (raw shrimp; nigiri) with 31 percent, followed by Ikura (salmon eggs; gunkan) with also 31 percent. Like Uni, Ikura is also disliked by many (19%) probably due to its strong flavour. Other favourites are Maguro/Tuna (30%) and Anago/Eel (29%).

The survey results show minor differences between the genders. Sushi types more popular among women than men are Amaebi (raw shrimp), Ikura (salmon eggs) and Sake (salmon). On the other hand, Toro and Maguro (tuna), Uni (sea urchin) and Anago (eel) are more popular among men than women. Furthermore, many more women responded to dislike certain sushi types than men: Uni, for example, is disliked by as many as 37 percent of the women, while it is unpopular among only 19 percent of men.