Home
Back
The coronavirus outbreak is having a large impact on travel to and within Japan. Read more
Gero Onsen
3.7
★★★★★
186 votes
#86 of 206
most visited in Japan

In the Edo period, Gero Onsen (ē║śCēĘÉ“) was referred to as one of Japan's three best onsen by the Confucian poet Hayashi Razan. While the town may now be quite a bit more urbanized than back then, the waters have retained that special quality which has made them so famous.

Gero is located between Nagoya and Takayama, about an hour south of Takayama. This makes it a convenient stopover, or an attractive alternative to stay during the Takayama Festival, when lodging is difficult to find in Takayama.

Onsen (hot springs) are what make Gero famous, and there are three public bath houses available in town. Also at the south end of the Gero Bridge is a large rotenburo (open-air bath) you can bath in for free; however, it has no facilities and is exposed to the bridge above. 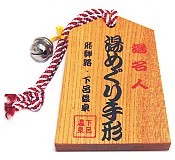 There are also many baths located in the numerous ryokan in the Gero area, several of which are open to the public during certain times of the day.

A good way to sample some of these is to purchase a Yumeguri Tegata (spa pass), a wooden tablet that can be bought all around Gero including the tourist office, ryokan, souvenir shops and convenience stores.

The Yumeguri Tegata gets you three visits to the baths of any of about thirty participating ryokan. It costs 1300 yen and is good for six months. It also makes a great souvenir.

Also dotted around the city are free footbaths where one can sit and relax after a hard day of walking.

Onsenji Temple worships Yakushi Nyorai, the Buddha of healing, whose image is credited to restoring the flow of hot spring water to the town after it was stopped up by a large earthquake. Climb the stone staircase to the temple gate to get a view of the city and Hida River.

By train from Nagoya or Takayama

The one way journey from Nagoya to Gero takes about 90 minutes and costs around 4500 yen by JR Hida limited express. There are departures every one or two hours and the trip is fully covered by the Japan Rail Pass. (How to get to Nagoya)

By bus from Takayama

Local buses connect Takayama with Gero Onsen every 1-2 hours. The one way trip takes about 90 minutes and costs 1060 yen.

By shuttle bus from Nagoya for overnight guests

Gero Onsen operates a daily shuttle bus for visitors staying overnight at Gero Onsen between Nagoya Station and Gero Station. The trip takes 2.5 hours and costs 2800 yen one way. A round trip ticket is available for 3700 yen. Advance reservations are mandatory.

Reservation service for ryokan and other Japanese style inns in Gero Onsen.

Traditional experiences in Koyasan and Sakai

Traditional experiences in Koyasan and Sakai