The Shimanami Kaido (éĄé▄é╚é▌ŖCō╣, Shimanami Kaidō) is a 60 kilometer long toll road that connects Japan's main island of Honshu to the island of Shikoku, passing over six small islands in the Seto Inland Sea. It is also known as the Nishiseto Expressway. There are two other land connections between Shikoku and Honshu, but the Shimanami Kaido is the only one traversable by foot or bicycle.

The Shimanami Kaido begins on Honshu in Onomichi City. It then leads across the six islands of Mukaishima, Innoshima, Ikuchijima, Omishima, Hakatajima and Oshima, before terminating on Shikoku in Imabari City. The route was opened in 1999, so the bridges are modern and attractive. Along the way, travelers can enjoy the beautiful scenery of the Seto Inland Sea and the islands' small towns.

In addition to the scenery, there are a few other attractions on the way between Honshu and Shikoku: On Ikuchijima Island there is the Hirayama Museum, which is dedicated to one of Japan's most famous painters, Hirayama Ikuo, who was born on the island. Nearby is a unique temple, Kosanji, which was built by a rich business man for his mother. There are a number of minshuku and camping grounds on the islands for those who want to extend the journey over multiple days.

Cycling is a popular means of experiencing the Shimanami Kaido. The bicycle route is well marked and maintained, and diverges from the expressway on the islands. The ramps leading up to the bridges were built at small inclines with cyclists in mind. At about 70 kilometers, the bike route is a bit longer than the toll road, but because there are no large inclines, it can be comfortably completed in a day by intermediate cyclists.

Two separate bicycle rental systems are offered along the Shimanami Kaido: the regular rental system features over a dozen terminals dotted along the cycling course, while a newer one is operated by bicycle manufacturer Giant with two terminals. Both systems allow tourists to rent their bicycles at one end of the route and drop it off at the other end, or - in case of the regular system - to stop anywhere in between when they become tired and take a bus for the rest of their journey.

The regular rental system is much cheaper and offers more terminals. The rental fee is 1,100 yen per day. A 1,100 yen deposit is charged and will be returned unless you drop off the bicycle at a terminal on a different island. Various types of bicycles are available, but some of the smaller terminals may only have a limited selection. Tandems (1,300 yen per day) and electric-assist bicycles (1,600 yen per day) are available at some terminals and must be returned to the terminal from which they were rented. Advance reservations can be made online, but are not mandatory.

The Giant rental system is more expensive and has only two terminals: one at Imabari Station and the other at Onomichi Station. Various high-quality bicycles are available for 4,000 to 13,000 yen per day. Drop-off at the other terminal is only possible with road bicycles, requires prior reservation and costs an additional 3,000 yen. Advance reservations can be made online.

Small tolls (totaling 500 yen) must be paid when crossing the bridges, not including the bridge between Honshu and Mukaishima Island, which is best replaced by a short ferry ride to/from central Onomichi (around 110 yen one way for an adult with bicycle). Note that until March 31, 2020, the tolls are waived for cyclists as a temporary measure to promote tourism. A same-day delivery service for luggage is available through Sagawa Express between selected hotels in Imabari and Onomichi.

Traveling the Shimanami Kaido is, of course, also possible by car. Expressway tolls total around 5000 yen one way. There are direct buses from Imabari to Hiroshima, Onomichi and Fukuyama. 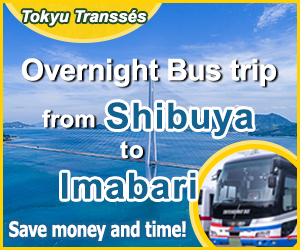 In Onomichi, the two cycling terminals are located about 150 meters from Onomichi Station. One is in a parking lot west of the Green Hill Hotel at the waterfront and the other, the Giant Onomichi store, is located in Onomichi U2, a redeveloped warehouse hotel beside this parking lot. There are three ferries operating between central Onomichi and Mukaishima, the starting point of the bicycle trail.

In Imabari, the two cycling terminals are located at Imabari Station. The terminal of the regular system is located a few steps from the station's west exit along the railway tracks, while the Giant Imabari store is located inside the station complex. Another large terminal is Sunrise Itoyama which also serves as a lodging; however, it is a bit difficult to access. There are infrequent buses from Imabari Station to the Sunrise Itoyama terminal. Alternatively, it is about a 2000 yen taxi ride from Imabari Station, or a 30 minute walk from Hashihama Station. For those who make reservations beforehand, a shuttle bus ride can be arranged.

Bus transportation along the Shimanami Kaido

Ferry transportation along the Shimanami Kaido

There are many ferry lines that travel to and from the islands along the Shimanami Kaido. The following two lines are most relevant to foreign tourists:

How to get to and around Onomichi

Transportation from Imabari to Onomichi

How to use Setoda Touring Pass?