Mount Shirane (öÆŹ¬ÄR, Shiranesan, often called Kusatsu-Shirane to differentiate it from other mountains called Shirane) is a series of volcanic peaks just outside the town of Kusatsu Onsen. It is a popular outdoor recreation area which offers hiking in the spring and summer, autumn colors in the fall and skiing in the winter.

Hiking is possible from mid April to early November and offers varying terrain and good views, along with a selection of trails starting at the town center or the Shirane Resthouse near the summit. The easiest and most popular walk is from the Shirane Resthouse to Yugama Crater Lake. It takes less than ten minutes along a paved trail, and you will often see women doing it in high heels. At the top you are rewarded by views of the sulfurous, baby blue Yugama Crater Lake as well as the surrounding mountain ranges. 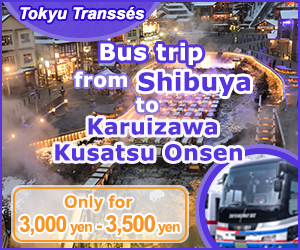 The road to Mount Shirane is closed during winter from mid November to mid April. Paid parking is provided adjacent to the Shirane Resthouse This is also where the bus stop is located.

From mid April to early November, there are buses between the Kusatsu Bus Terminal in the town center of Kusatsu Onsen and the Shirane Resthouse (30 minutes, 1130 yen one way, one bus every 1-2 hours). Some - but not all - of these buses are operated by JR and are covered by the Japan Rail Pass, JR East Nagano Niigata Area Pass and JR East Tohoku Area Pass.

From late April to late October, there are infrequent buses between the Manza Onsen (Manza Prince Hotel) and Kusatsu Onsen that make a stop at the Shirane Resthouse along the way. The one way ride between Manza and the Shirane Resthouse takes 15 minutes and costs 430 yen. The buses are not covered by the any JR passes.

From Yudanaka, the snow monkeys and Shiga Kogen

From late April to early November, there are buses between Yudanaka Station in Yamanouchi and the Shirane Resthouse (70 minutes, 1650 yen one way, one bus every 1-2 hours) that stop along the way in Shibu Onsen, the Snow Monkey Park bus stop and Shiga Kogen. The buses are not covered by any JR passes.

How to get to and around Kusatsu Onsen

Kusatsu onsen, one day? from Tokyo

Can we visit Mt. Shirane this July?