Home
Back
The coronavirus outbreak is still having an impact on travel in Japan. Read more
Food and Drink

Soba (é╗é╬) noodles are noodles made of buckwheat flour, roughly as thick as spaghetti, and prepared in various hot and cold dishes. Soba dishes are very popular and easily available nationwide. As 100% buckwheat soba noodles tend to be brittle, many restaurants add some wheat flour when preparing their noodles. Depending on the shop, the percentage of buckwheat flour in soba noodles typically ranges between 40% and 100%.

The most basic soba dish is mori soba in which boiled, cold soba noodles are eaten with a soya-based dipping sauce (tsuyu). Many soba dishes are eaten throughout the year, while others are only available seasonally. A special kind of soba dish is Toshikoshi Soba, a symbol of longevity, that is only eaten on New Year's Eve.

Like pasta, soba noodles are available in dried form in supermarkets, but they taste best if freshly made by hand from flour and water. Soba making has long been a popular hands-on activity for domestic and international travelers. The activity is offered by many craft villages and travel tour companies.

Soba can be served hot or cold. Below are some of the more common varieties tourists will encounter. Note that some dishes are known under different names depending on the region.

The most basic kind of chilled soba served on a tray with a simple chilled dipping sauce (tsuyu) served on the side. The dipping sauce is usually a mixture of soup stock, water and mirin. There are historical differences between Zaru and Mori soba. However in recent times, one major difference between the two is zaru soba has nori seaweed on top of the soba noodles while mori soba does not.

Soba noodles served in a bowl of hot, clear broth. The broth is made of the same components as the dipping sauce for the chilled soba, but in a lower concentration.

This soba dish comes with a serving of tempura either on the side or on top of the noodles. There are usually three to five different kinds of tempura pieces, and the ingredients varies from shop to shop. The noodles are served either on a tray (as on the photo) or in a soup.

The literal translation of Tsukimi is "moon watching" and hence, Tsukimi Soba has a raw egg which is supposed to resemble the moon.

Tororo is a white, sticky, paste-like cream made of grated raw nagaimo (yam). It is usually placed on top of the soba noodles or served on the side to be added to the noodles by the guest (as on the photo).

Sansai Soba is served with cooked sansai (wild vegetables) placed on top of the noodles in the broth.

Nanban Soba usually refers to broth that has leek added to it. Most times, nanban soba has either chicken or duck in the broth as well, and the inclusion of meat is also reflected on the menu, i.e. Tori Nanban Soba (chicken) or Kamo Nanban Soba (duck).

Where to eat soba

Soba is easily available nationwide at specialized soba restaurants which often also have udon noodles on their menu. But soba dishes are also a common menu item at eateries around tourist spots, family restaurants or izakaya. The dining out section explains what to expect inside a sit-down restaurant in Japan.

At some busy train stations, standing soba restaurants can be found for a quick meal between train rides. Ordering at standing restaurants is as simple as buying your meal ticket from the vending machine, giving it to the staff and enjoying your noodles while standing at the counter.

How to eat soba

Depending on how your soba are served, the way of eating differs:

Soba served in a soup (usually the hot ones) are enjoyed by using your chopsticks to lead the noodles into your mouth while making a slurping sound. The slurping enhances the flavors and helps cool down the hot noodles as they enter your mouth. The broth is drunk directly from the bowl, eliminating the need for a spoon. It is not considered rude to leave some unfinished soup in the bowl at the end of the meal.

For soba that are served with a dipping sauce (usually the cold ones), mix some of the green onions and wasabi into the dipping sauce first. Then, you eat the noodles with a slurping sound after dipping them into the sauce. 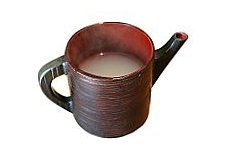 If your soba were served with a dipping sauce, some soba restaurants will give you a little teapot (see photo to the right) towards the end of the meal that is filled with what looks like hot cloudy water. This is sobayu, the water that the soba noodles were cooked in. Sobayu is meant to be poured into your remaining dipping sauce after you have finished your noodles. This is how you can finish your dipping sauce by drinking this mixture and adjusting the amount of sobayu as you prefer.

While soba can be easily found all over Japan, soba tends to be more popular in rural areas, and especially in regions where the soil is suitable for growing buckwheat. Soba produced in some regions are more famous than others. Nagano Prefecture and Yamagata Prefecture, for example, are well-known for their soba.

Eating Wanko Soba is an experience in itself. Each serving contains roughly a mouthful of soba noodles, and the server will constantly keep topping up your empty bowl with more noodles until you indicate that you have had enough. The first bowl is eaten plain to taste the flavour, and toppings can be added from the second bowl. The average for women is about 30-40 bowls, while men average about 50-60 bowls. The dish is popular in Morioka and surroundings.

Ita Soba is a specialty of Yamagata Prefecture. The noodles are cut slightly larger in width compared to average soba noodles, reminiscent of soba noodles made in the countryside. Ita Soba is served on large boards (ita). As unpolished soba flour is used, the texture and the smell of buckwheat is stronger.

Uji is a city south of Kyoto that is famous for tea. Green Tea Soba is buckwheat flour mixed with green tea powder, resulting in green soba noodles with a green tea flavor. It is eaten as per normal soba noodles, and comes in both hot and cold varieties.

Nishin Soba is so named for the preserved pacific herring (nishin) that is placed on top of the noodles in hot broth. Nishin is prepared by first drying, then being braised in a sweet sauce. It is popular in Kyoto.

In Izumo, the hull of the buckwheat seed is used in making buckwheat flour. The result is soba noodles that are darker and have a stronger buckwheat smell than the average soba noodles. Izumo soba is usually served in a three-tier serving bowl together with a variety of toppings. It is eaten by first adding some toppings and dipping sauce into the first layer, then pouring the leftover to the next layer and adding more fresh toppings and dipping sauce, etc.

While called soba, Okinawa Soba are not made with buckwheat flour but with wheat flour. Their texture is more of a cross between ramen and udon noodles. Okinawa Soba are usually served in a hot pork broth with slices of simmered pork, green onions and pickled ginger.

Basic introduction to the way of tea

Basic introduction to the way of tea