Highway buses (Źéæ¼āoāX, kōsoku bus) are an inexpensive alternative to trains for long and medium distance travel in Japan. On longer distances many highway buses travel overnight. While buses tend to be slower than express trains, they are usually considerably cheaper. Especially on competitive routes, discount fares have dropped to very low levels. There is also the Japan Bus Pass which allows for very cheap bus travel.

Japan is covered by a dense network of daytime and overnight highway bus lines. Every prefecture and larger city is served by at least one bus company, operating lines into other parts of the country. On a few popular routes, especially routes to/from Tokyo, numerous companies are competing against each other, while on other routes they are often cooperating rather than competing. The map below shows some of the major highway bus lines across Japan:

Willer Express is a leading discount bus operator with a wide network that allows for interregional bus travel. It is one of the few bus operators which allow online reservations in English. Willer Express also sells the Japan Bus Pass, a very cheap bus pass for foreign tourists in Japan.

While not as cheap as discount buses, JR buses are still considerably cheaper than express trains and are relatively easy to use by foreign tourists, because tickets can be bought and seat reservations made at ticket counters at JR railway stations across Japan. In addition, kousokubus.net allows for English online reservations of some JR highway bus lines.

Until spring 2013, the Japan Rail Pass used to be valid on a small number of JR highway bus lines, but it is now not valid on any highway bus anymore.

In recent years, the number of English online reservation websites that allow users to reserve many buses nationwide has increased considerably. Among the leading online reservation sites for highway buses are Willer Express (not only for Willer buses, but also for many buses of other companies) and Japan Bus Online.

On most routes, three types of tickets are available: one way tickets, round trip tickets and booklets of multiple tickets:

Round trip tickets are typically around ten percent cheaper than two one way tickets. However, the return trip has to be made within a certain time frame, typically within six to ten days following the outward journey.

Booklets of multiple tickets (kaisuken) usually include four or five tickets which can be used in either direction and are discounted by about ten percent compared to single tickets. The tickets need to be used within a certain time frame, typically within three months of purchase.

Discounts are also usually available for children (aged 6-12), students and groups. In recent years, some bus companies have started to offer discounts on tickets purchased far in advance, for example more than 7 or 21 days before travel date.

How to buy bus tickets

Bus ticket can usually be purchased at major bus terminals, by phone (often in Japanese only, see phone numbers on the bus operators' websites), at convenience stores (using a terminal with instructions in Japanese), through travel agents or online (usually in Japanese only). The websites by Willer Express and Japan Bus Online allow for online reservations in English, while tickets for JR highway buses can also be purchased at ticket counters of JR stations across Japan.

Many long distance buses, especially overnight buses, require advance seat reservations. It is recommended to make reservation early for popular routes and during busy travel seasons. However, if the bus is not booked out, it is usually possible to purchase a ticket just prior to departure at the bus terminal. On some shorter bus lines, seat reservations are not possible.

Discount buses often do not use major bus terminals, but stop at less easily found bus stops near a bus terminal or railway station. These locations can be slightly challenging to find, so make sure to confirm them in advance to know exactly where your bus departs from.

When stopping along the way, many buses use bus stops along the expressway. Be aware that these stops are often not centrally located and may require an additional bus or taxi ride into the city center.

Overnight buses are typically equipped with comfortable, reclining seats, which are arranged in rows of three seats and one or two aisles. On cheap overnight buses and most daytime buses, standard buses with four seats per row are in common use.

At the other end of the spectrum, premium buses with seats, that resemble business class seats on airplanes, have been introduced on the most competitive Tokyo-Osaka route. Premium seats naturally come at an increased cost, but note that the discount operator Willer Express is among the companies operating some premium buses.

Most buses come with a toilet on board and/or make regular toilet stops along the way. Smoking is generally not permitted on highway buses. On some buses, personal entertainment systems, wireless internet and electrical outlets make for a more comfortable ride.

Most highway buses come with a spacious luggage trunk for large suitcases and bags. There is usually a limit of one or two large pieces of luggage per passenger. Smaller bags can be taken onto the bus where there are usually some overhead racks. More restrictive rules and limits may apply depending on the company and route. 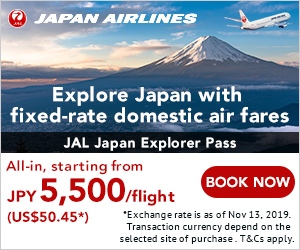 Good introduction to buses in Japan.

Connecting Nagano and Matsumoto with various cities in Japan.

Connecting Nagano and Matsumoto with various cities in Japan.

Connecting Kobe and Himeji with various cities in Japan.

Connecting Matsue and Izumo with various cities in Japan.