As the capital and the seat of the Imperial Court for over 1000 years, Kyoto has set the quality standard for Japanese arts and crafts. Members of the Imperial Court were particularly influential patrons and practitioners of the arts, and their influence resulted in the development of many popular art forms. The city remains the most important center of traditional Japanese crafts today.

Pottery is a common craft throughout Japan and one of Kyoto's most popular specialties. Of the different styles of Kyoto pottery (kyo-yaki), Kiyomizu pottery is the most famous. This ceramic ware and porcelain is hand painted with elaborate designs and often used in the tea ceremony. Kiyomizu pottery is named after the area around Kiyomizudera Temple, where it was first developed. It is still widely available for purchase in stores around Kiyomizudera.

Kyoto's kimono are also regarded to be among Japan's finest specimen. Two methods of kimono manufacturing native to Kyoto are silk weaving (nishijin-ori) and silk dyeing (kyo-yuzen). The silk weaving method was developed as a result of demand from the Imperial Court for beautiful fabrics and elegant clothing and involves dyeing the yarn before weaving it into patterns and images on fabrics. In the silk dyeing method, the images and patterns are dyed after the fabric has been produced.

The first evidence of Japanese dolls dates from the Jomon Period. However, Kyoto dolls (kyo-ningyo) became popular during the Heian Period, when they were thought to bring luck and health to children. Gradually, the dolls became popular with daughters of aristocrats in the Imperial Court and the craft was further developed. Kyoto dolls are still one of the more popular Kyoto specialties.

Folding fans (kyo-sensu), decorated with beautiful pictures, were a status symbol in the Imperial Court. They were carried by both men and women and used according to a strict code of decorum. Folding fans from Kyoto are regarded as the country's highest quality fans.

Lacquer ware is another hallmark craft of Japan, and the Kyoto variety, kyo-shikki, is especially popular. Lacquer ware originated in the Nara Period, but it only became widespread about 500 years later. Kyoto lacquer ware has been frequently used in tea ceremonies.

Home to the Emperor for over 1000 years, Kyoto often hosted elaborate shinto ceremonies and festivities. Specialized Shinto objects, such as masks, crowns and instruments were developed for these events, some of which can be seen in Kyoto's many shrines. The city remains Japan's main producer of Shinto objects today.

Other Kyoto crafts include ukiyo-e (woodblock prints), Japanese umbrellas (wagasa), various crafts and tools made of bamboo, and washi paper, a thick type of paper used for origami, ukiyo-e prints and many other purposes.

Kyoto has dozens of facilities catering to the sale, creation and teaching of various handicrafts. Buyers seeking original, handmade pieces can trust store owners' advice; owners and facility managers are honest about the quality and price of their products. Besides the usual craft and souvenir shops, many Kyoto craft specialists also offer programs, allowing guests to try producing their own crafts.

Hours: 9:00 to 17:00 (entry until 16:30)
Closed: A few days in mid August and over New Year
Admission: Free
The Fureaikan, located in the Miyako Messe convention hall, provides beautiful displays and multilingual explanations on nearly every Kyoto craft. It also offers workshops and classes.

Hours: 10:00 to 17:00
Closed: December 29 to January 3
Admission: Free
Nishijin Textile Center (Nishijin-ori Kaikan), named after the city district and local kimono weaving technique, offers interesting displays on kimono, and a kimono show is held several times a day. Last but not least, there is a large shopping section.

Both facilities can also be accessed in about ten minutes on foot from Keihan Marutamachi Station on the Keihan Railway Line or Higashiyama Station on the Tozai Subway Line.

Take the Karasuma Subway Line from Kyoto Station to Imadegawa Station (9 minutes, 260 yen), from where Nishijin Textile Center is a 10 minute walk in western direction near the junction of Imadegawa and Horikawa Streets.

Visitors can also board Kyoto City Bus numbers 9 or 101 from Kyoto Station. Disembark at Horikawa-Imadegawa bus stop (about 25 minutes, 230 yen). 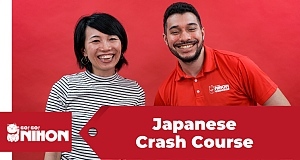